We Have A New Puppy!

This Monday, July 7th, my fiance and I went to the airport and picked up this little guy:

His name is Beetle and he is adorable.  Normally I think pugs are hideous (it was her idea), but Beetle is the sole exception.  Obviously. 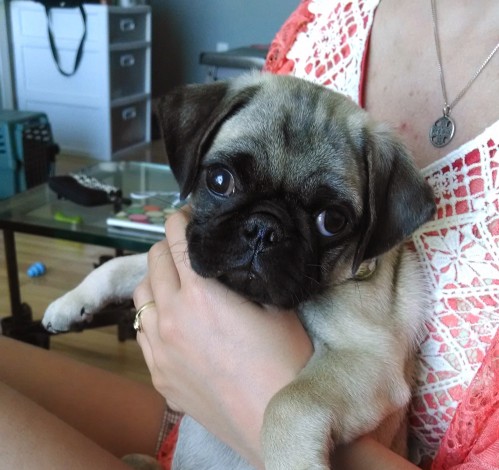 I mean, come on. Just look at him!

The upshot is that I have been very busy.  You can’t quite tell in the photos, but Beetle came to us with a corneal ulcer that left him blind in his right eye.  Our vet gave us some eye drops that we had to administer once every half-hour for 24 hours, which made for an interesting day at work the next morning.  It’s looking much better now, though, as you can see.  Unfortunately it’s also given him much more energy, so although we have been sleeping better we haven’t had a whole lot more free time. In the spare time I have had, I’ve continued to tinker with my math game (please, everyone, contain your excitement).  I have the basic game logic in place, so I think the biggest hurdle now is the UI.  I have almost no experience with JavaScript or really any kind of web-based interface, so right now I am doing awful things like creating and rendering a whole new instance of the game (leaving the old one abandoned on the screen) every time I want to restart or add a button to the interface, which is pretty frequently.  It is not clear to me how much Ajax is actually supported directly in Amber, and how much I’ll have to implement myself or even inline with JavaScript.  As is often (sadly) the case with Smalltalk languages, Amber’s documentation is rather spotty and absolutely none of it is on their website.  The good news is that Amber’s semantics are supposedly based on Pharo/Seaside, and those guys do seem to have good documentation.  Guess I’ll be learning some Pharo as well!

Alright, that’s all for now.  I promise this will be the last time I post dog pictures on my blog.[1]  Next week I’ll have something a little more substantial for you.  Thanks for stopping by!

The above images are licensed by Malcolm McCrimmon under a CC BY-SA 4.0 International License.